No Age - Everything in Between Album Review

Review of Everything in Between Album by No Age

No Age have always had a weight of expectation upon their shoulders. Signing to Sub-Pop is equal parts an endorsement and a sword of Damocles. There is still a particular expectation from the label based around its Seattle locale, despite its efforts to try and geographically broaden its roster. However, The LA duo impressed with 2008's Nouns, which harnessed their live energy and coupled it to a wispy ambience, making the album intangible yet accessible. 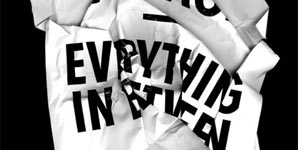 They are a spirited and inventive band generally, so it was unlikely that a carbon replication of Nouns was on the cards. But even by their standards, Everything in Between is an impressive, mature record which sees the band master their sound and discover temperance in their experimentation.

With Nouns, the mood and tempo of the album was somewhat of a lottery. Part of its charm was its wild gyrations from quiet to loud and back again. But Everything in Between begins in shedding the layers of warm feedback and heading for more hook-filled territory. 'Life Prowler' is their most stripped back song to date, which has the benefit of lifting the smokescreen from the lyrics: 'And when I reach into/ myself my past comes true/ my life.'

Single 'Glitter' is the best example of the new, grown-up No Age and reinvents them as a band unafraid of a love song. Built up around infectious hand-claps, the shredding and jarring melody is warm and its lyrics wistful: 'feel like everyone is out to get you/but I want you back/ underneath my skin.'

'Fever Dreaming' is more typical in tempo of Weirdo Rippers, as is 'Depletion' - but there is a deliberate restraint upon the FX pedals - perhaps a response to some criticisms that their songs were simply 'lost in the fog' before. It's maybe at the halfway point, 'Valley Hump Crash' (fun to say) that the familiar fuzz re-appears then envelopes Everything in Between.

After that, what becomes is actually best described by a song title of their choice: 'Shred and Transcend.' The album changes down a gear, and there is a definite shift towards pure, haunting noise. 'Sorts,' 'Positive Amputation' and 'Dusted' are beautiful introspective experiments, reminiscent of My Bloody Valentine at their best. But just when you are lulled into drifting off, 'Shred and Transcend' kicks in with a monster riff and literally pulls the rug out from under your meditations. It seems they have learnt how to keep the listener engaged.

So by separating their motives and with less attack/more forethought, No Age have become the band they were always capable of being. There will no doubt be laments that the frenetic urgency of Weirdo Rippers has been lost, but the care with which Everything in Between has been put together makes it an involving album; one which you can sink into and really love.

No Age - Everything in Between