It's 1978 Boston and an unlikely gang made up of Justine (Brie Larson), Stevo (Sam Riley), Chris (Cillian Murphy), Bernie (Enzo Cilenti) and Frank (Michael Smiley) - meet up with a criminal insider named, Ord (Armie Hammer) who has contact with someone from whom they can buy a set of guns. They all meet up in an abandoned warehouse, and the gang soon realise that these arms traders are not messing around. Led by the volatile Vernon (Sharlto Copley), things take a violent turn when the traders try to sell the gang the wrong set of weapons. A comedic shoot-out ensues, with everybody turning on each other while trying to stay alive and escape with their money and merchandise. But they find themselves having to work together when an mysterious sniper shows up trying to shoot them all.

Lost In Karastan directed by Ben Hopkins follows the story of Emil Forester an award winning British filmmaker on his chaotic journey back in to the world of filmmaking after being absent from the industry due to having a creative block in his ideas. He believes his luck has changed when he is approached by the dictator of the Republic of Karastan who wants him to make a new film.

By Rich Cline
Extraordinary
Director Hillcoat and musician-turned-screenwriter Cave previously worked together back home in Australia on the dark Western The Proposition, and now they have reunited in America for this true story set during Prohibition in the early 1930s. Unsurprisingly, it plays out like a Western. And it also features two of The Proposition's memorable actors, Pearce and Taylor.

The story centres on the three Bondurant brothers in rural Virginia. Eldest sibling Forrest (Hardy) runs the family moonshine business with middle brother Howard (Clarke). But the younger Jack (LaBeouf) wants in on the action and secretly teams up with whiz-kid Cricket (DeHaan) to speed up production and sell their wares to a big-city gangster (Oldman). Then slimy city-slicker Federal Agent Rakes (Pearce) arrives, determined to stop bootlegging no matter who he has to torture and kill. Meanwhile, a sexy barmaid (Chastain) with a shady past arrives to distract Forrest, while Jack daringly woos the rebellious daughter (Wasikowska) of the local preacher.

The Bondurant Brothers, Forrest, Howard and Jack, take up lawless methods of achieving the American Dream during the Depression in Franklin County, Virginia. Soon their illegal money-making schemes, including selling their home brewed moonshine in their saloon, attract the attention of the local law enforcement who recruit a corrupt inner-city cop, Charlie Rakes, to break the brothers and force them to give him shares in their profits. In an attempt to gain his brothers' respect and win the heart of the pure and well brought up Bertha who seeks danger and excitement, the suggestible and smart Jack partners with the brutal and, quite frankly, untrustworthy city gangster Floyd Banner - things start to become strained for the Bondurants when the 'indestructible' Forrest is seriously injured and loyalty among the brothers is questioned.

By Rich Cline
Excellent
Shamelessly enjoyable, this raucous Aussie movie keeps us laughing - and ultimately sniffling back the tears - as it recounts an urban myth. A terrific sense of the time and place, rambunctious characters and a terrific starring dog make it well worth seeing.

15 year old Oliver sees himself as something of a cool child prodigy, when in fact, he might be smart but he's also a loner. Oliver's mother Jill is thinking of leaving her husband for a new age mystic called Graham as her relationship grows closer to him day by day whilst his father seems to be falling into a deeper depression.

By Christopher Null
Excellent
In Hollywood, you just can't make a movie like Shine. Put simply, it is just not allowed.

This is our loss and Australia's gain, because Shine comes off as one of the upper-echelon films of the year, an ambitious and unflinching look at that country's David Helfgott, a prodigy of a pianist driven insane by his father, only to emerge again after 20 years of institutionalization.

Charlie And The Chocolate Factory (2005) Review

By Christopher Null
Good
For a guy who's earned a reputation for being one of the most original filmmakers on earth, Tim Burton has an awfully large fondness for remakes. And what a mixed bag they are: His hit Batman spawned a huge movie franchise, while his Planet of the Apes stands as one of the most widely trashed films in recent memory.

And so Burton takes a third stab at the remake game with Charlie and the Chocolate Factory, an update/remake (call it what you want) of the beloved 1971 movie Willy Wonka and the Chocolate Factory and Roald Dahl's classic children's novel. But the stakes here are far greater than they were with Apes. That was a campy sci-fi movie that no one really cared about. In fact, the original Apes had long since killed itself under the weight of four increasingly awful sequels. Willy Wonka and the Chocolate Factory frequently tops "Favorite Movie Ever" lists, and news of the remake has met with nothing but scorn from fans (including 1971 star Gene Wilder, who later retracted his scathing remarks).

Lost In Karastan directed by Ben Hopkins follows the story of Emil Forester an award... 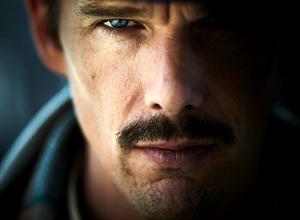 'The Bartender' (Ethan Hawke) is the nickname given to a Temporal Agent whose job it... The Bondurant Brothers, Forrest, Howard and Jack, take up lawless methods of achieving the American...