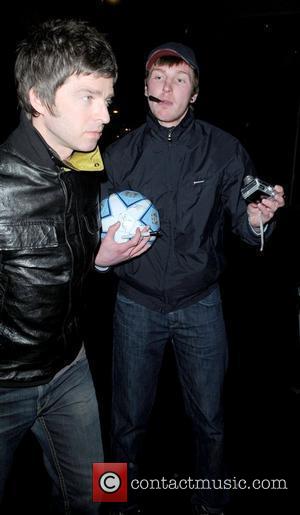 Picture: Noel Gallagher Celebrities outside the Radisson Hotel, ahead of the second leg of the Carling Cup semi-final football match between Manchester United and Manchester City...

Noel Gallagher took a swipe at his brother LIAM during his second concert since quitting Oasis - mocking his sibling's new career as a fashion designer.
The rocker, who walked out on the band last August (09), took to the stage for a second solo show at London's Royal Albert Hall on Friday night (26Mar10) as part of a gig for the Teenage Cancer Trust.
And after a reveller shouted out, "Where's Liam?" during Gallagher's set, the musician took the chance to slyly slam his brother's new project designing men's clothes for his fashion line Pretty Green.
Responding to the fan's question, he said, "For the record that guy said, 'Where's Liam?'. He's probably being a real northerner somewhere designing the perfect desert boot."