Actor Norman Reedus Has Denied Rumours He's Romancing His Former The Walking Dead Co-star Emily Kinney, Poking Fun At The Reports All Over Social Media With A Photo Of Himself And Arnold Schwarzenegger. 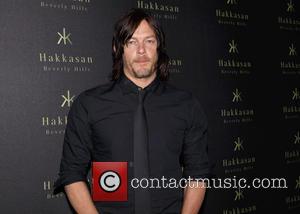 Speculation of a possible off-screen romance surfaced on Wednesday (17Jun15) after a report from Us Weekly suggested the actors have taken their friendship to another level, with a source telling the publication, "They had a connection early on in the show, but the romance developed recently. They're still pretty guarded about it."

However, after the gossip spread, a representative for Reedus denied the reports, telling JustJared.com, "We can confirm that they are not dating."

Reedus then took matters into his own hands by tweeting "new couple alert" to followers and attaching a photo of himself holding a beer alongside action man Schwarzenegger at the CMT Music Awards last week (10Jun15).