Off Festival Katowice 2014: From Belle And Sebastian To Deafheaven 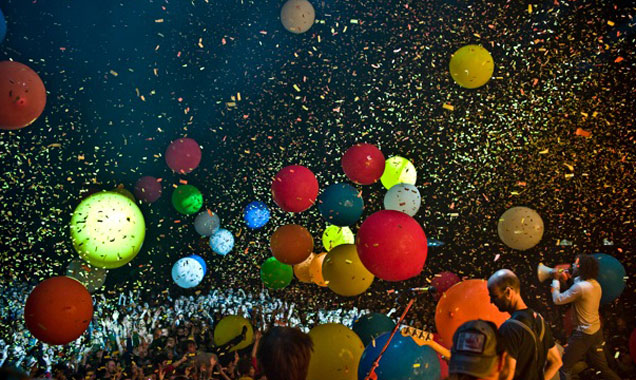 Off Festival Katowice 2014: From Belle And Sebastian To Deafheaven

If you're a fan of the revolutionary sounds of NEU! or the catchy tunes of Belle & Sebastian, a connoisseur of Chelsea Wolfe's sombre ballads, or you'd just like to dive into the dark labyrinth of Deafheaven, there's only one place to be: the Off Festival, of course, this August in Katowice.

OFF are proud to announce the latest additions to the lineup of this year's festival at Three Pond Valley: Belle & Sebastian, Michael Rother presenting the music of NEU! and Harmonia, Deafheaven, Chelsea Wolfe, 65daysfstatic, Jacques Greene, and Perfect Pussy. More high-proof acts that run the gamut of genres, scenes, and generations.

Belle & Sebastian
If Belle & Sebastian aren't being played on every radio station and young girls aren't fainting at the sight of them, it's probably just because the band only started recording songs in the nineties. Yet the sheer power of Belle & Sebastian's hits is so great that it is nearly inconceivable that there was once a time when they didn't exist - that they weren't written by Simon and Garfunkel, the Beatles, or even the young Morrissey. Just think of "Like Dylan in the Movies", "Dear Catastrophe Waitress", or "Funny Little Frog" - melodies like these pop up in your head and automatically nominate Stuart Murdoch for a seat among the greatest songwriters in history. Add to that the delicious, juicy arrangements and the subversive, bittersweet lyrics. Belle & Sebastian are classics that never sought glamor, and so remained a group of friends from Glasgow. A model indie-pop band, and much more.

Michael Rother presents the music of NEU! and Harmonia
The past was dramatic, the future uncertain, and the present mocked them with the pen of British critics. So they played outer space. They combined a mechanical beat with a psychedelic trance sound and a wall of guitar noise. They pressed on, writing a completely new chapter in musical history, and the response was quick. Iggy Pop hailed NEU! as impossible to pigeonhole. Brian Eno flew in to a Harmonia show in Hamburg to propose a collaborative project. Finally, Michael Rother got a call from David Bowie himself, asking him to perform on his next album. Afraid of the results of such a combination, Bowie's label put a stop to it. Dismayed, the British singer named the album after one of his favorite NEU! songs, "Heroes". We just might hear that track at a special performance by Michael Rother at this year's OFF Festival, his first concert in Poland. It's going to be out of this world.

Deafheaven
Some listeners may have been too busy arguing whether Deafheaven is black metal or some kind of hipster post-rock to notice that the American group recorded one of the most highly-praised albums of 2013. Sunbather is a bold, multi-threaded, experimental impression on the theme of "what would metal sound like today if it abandoned the comfort of well-worn paths and broke down the barriers of stereotypes". Unbelievably enough, the results have been lauded by everyone from Pitchfork to Rolling Stone and Decibel. We'll find out how well it works live this August in Katowice.

Chelsea Wolfe
Hailing from California, Chelsea Wolfe continues the beautiful traditions of American folk, though she herself claims to draw inspiration from Russian singer-songwriters and Norwegian black metal. That's not hard to notice. Ms. Wolfe has a beautiful way of singing her dark, hypnotic songs, but she can scare you with her funereal vibes and grate your nerves with her distorted guitar. Her 2011 album Apokalypsis pulled her out of the darkest depths of the underground, while Unknown Rooms: A Collection of Acoustic Songs confirmed just how original and brilliant an artist she is. And last year's Pain and Beauty lofted Chelsea into the major leagues. The title of her latest album says it all: only PJ Harvey in her prime could fit that much pain and beauty into a single song.

65daysfstatic
Legend has it that a certain celebrity showed up backstage after one of their UK shows. His name was Robert Smith, and he was so impressed with their performance that he immediately asked them to support The Cure on their worldwide tour. That's not to suggest hat 65daysfstatic play goth-tinged melodic post-punk. Though they started out as a straightforward post-rock band, each album has revealed an expanding horizon of electronic influence. Their latest release, titled Wild Light, is sure to satisfy fans of synth-driven shoegaze in the style of M83 as well as those looking for a Mogwaiesque post-rock narrative.

Jacques Greene Live
You know that bored-looking guy with glasses in the video for Azealia Banks'"212"? Despite appearances, he's no geek: he's actually one of Canada's most interesting producers. Recording for such labels as Night Slugs and LuckyMe, Jacques Greene has quite an ear for great melodies. No wonder the tracks he's worked on feature an entire who's-who of r'n'b divas: from Ciara to Ashanti. Future garage, but with a sentimental twist. If you're here to dance, you've come to the right place.

Perfect Pussy
Though she might look like Alice Glass onstage, Meredith Graves and her band sound more like Iceage or Japandroids in their early years. Their music also echoes the riot grrrl movement and heavily-distorted noise-rock. Their demos have garnered enthusiastic reviews in the American press ahead of their upcoming full-length debut, Say Yes to Love, slated for release in March, when the band heads out on tour, stopping in Katowice along the way.

Tickets:
Three-Day OFF Festival Passes are now available at the OFF Shop. These passes are valid for all shows at Three Pond Valley. The price of the pass is a low 180 PLN / 42 EUR! Hurry - the price goes up in March.

Important information:
1. This year, the price of the pass does not include a camping pass. You can buy a separate camping pass for 60 PLN / 14 EUR (this lets you stay at the campsite from Friday, August 1, to Monday, August 4). If you buy a three-day camping spot and want to come to Katowice a bit early, you can purchase an extra night (Thursday/Friday) for 25 PLN / 6 EUR per person.

2. As always, we're planning a Before Party in downtown Katowice on Thursday, July 31, but the event will be slightly different this year. To enter, you need to buy a separate ticket. A detailed schedule for Thursday night will be announced shortly.

Buy tickets for Off Festival 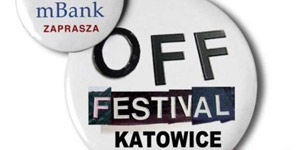