One Direction Zayn Malik The Wanted 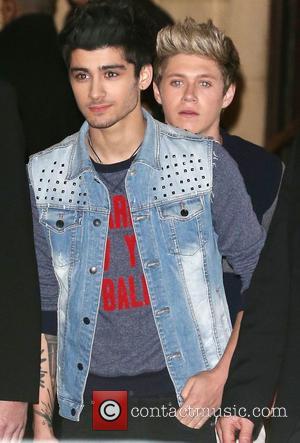 Picture: Zayn Malik and Niall Horan of One Direction, leaving the Royal Albert Hall after performing at The Royal Variety Performance. London, England - 19.11.12

The feud between One Direction's Zayn Malik and The Wanted's Max George appears to have intensified after the X Factor star called his rival "chlamydia boy." After a day of bitchy tweets to each other, Zayn's comment appeared to take things to a whole new level.

Max, who is currently in Canada with The Wanted as they tour with Justin Bieber, told Malik, "tell me you're problems without the 8 security in NYC.. The only problem I have with you is the s*** banter. Grow up son." You'd have to be a detective to figure out the ins and outs of their exchanges, though Zayn appeared to call Max the "geek of the week." When The Wanted star replied, "Does that mean I'm 'in'?", Malik offered, "'I'm not sure why your still talking to me mate conversation ended when I called you a geek. p.s your display just how's how much of a wannabe you are :)" Later, Max told Zayn to "enjoy rehearsals" but "stay off the bud...it clearly makes u cranky," which is when Zayn delivered the insult, "alright chlamydia boy ;)"

According to The Mirror, Zayn's girlfriend Perrie Edwards from Little Mix has been hanging out with Max's ex-girlfriend Michelle Keegan, which may have prompted the initial feud on Twitter. Max and Michelle split earlier this year following rumours of infidelity.