Louis Tomlinson: Gay Rumours Are ‘Degrading’ Towards My Girlfriend 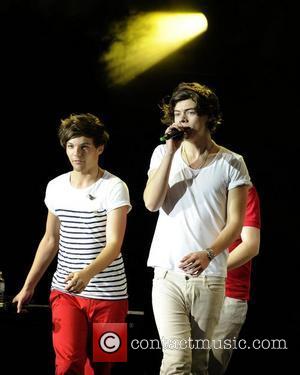 Louis Tomlinson has described the gay rumours about him and band-mate Harry Styles as ‘really degrading’ towards his current girlfriend.

The One Direction singer initially found the suggestions funny and seemed to play up to it a lot when the cameras were around. However, since starting dating Eleanor Calder, he admits it has all become wearisome. He spoke to overtly homosexual comedian Alan Carr in a pre-recorded interview for his show ‘Alan Carr: Chatty Man’. ‘I just think it’s really degrading towards her’, he said, according to The Mirror, after being asked about the issue.

Louis and Harry have even had a ‘Brangelina’ style nickname coined for them; Larry Stylinson; which has annoyed Louis even more. He previously told MTV News that he finds it ‘hard to deal with’ since being in a relationship and said that it affected how he was with Harry in public, confessing that although they want to mess around like normal friends, they can’t because of the ensuing false reports. Earlier this month he posted a rather cryptic Tweet that could be in reference to the rumours: ‘Still months on reading ridiculous conspiracy theories. It's upsetting that I have to read them daily. Thank god for the lovely people on here’, the comment read.