Can One Direction Truly Be Called The New Beatles?

80,000 One Direction fans will descend on Leicester Square tonight. 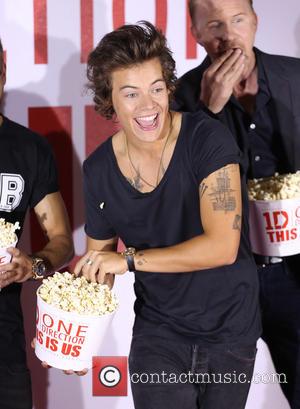 Picture: One Direction and Harry Styles - One Direction 'This Is Us' - Photocall and Press Conference - London, United Kingdom - Monday 19th August 2013

Authorities are predicting that 80,000 dedicated One Direction fans will descend on London's Leicester Square for tonight's premiere of their documentary film This Is Us, directed by Morgan Spurlock.

Hundreds of fans had camped overnight in central London to ensure priority wristbands to the premiere, though by 6pm, police predict that Leicester Square could be swamped by 80,000, each with ideas of getting a glimpse of their idols.

It's an unbelievable number. It's a stadium gig full of people. It's a packed Wembley Stadium, crammed around the Odeon.

According to the Independent, a "carefully controlled stewarding" operation had handed out stickers to 3,000 fans who were told they had a good chance of entering the penned area, where band-mates Harry Styles, Zayn Malik, Liam Payne, Niall Horan and Louis Tomlinson will appear this evening.

The security operation is being overseen by the police and Westminster Council, though problems are already arising. With increased media coverage and good weather scheduled all day, the queue for a sticker is now snaking around the entire Square and is likely to stretch further out into central London.

Dani Pring, 16, was the first fan in the queue. She arrived with a sleeping bag on Sunday morning. It is now Tuesday afternoon.

The level of frenzy surrounding One Direction - a band who finished third on The X-Factor - has led to comparisons with The Beatles. Though there's plenty of distinctions, not least in that the Liverpool group wrote some of the world's greatest songs whereas 1D mostly sing pop hits written by people paid to do it, there comparison is still valid.

"This is probably the closest I'll get in my whole lifetime to seeing anything similar to Beatlemania," director Spurlock told ITV News this week, "The access we got, the stories we tell . I just think it's remarkable."

It's true that Britain hasn't seen such a fan-following since The Beatles, though the One Direction boys quite rightly play down the link.

"No, I think it's very flattering that people make comparisons with The Beatles but it's not something we agree we," said Louis this week, "They were in a league of their own," added Liam. "And cooler than us."

Paul McCartney himself has already had his say on the Beatles comparisons, cautiously telling ITV1's Daybreak show, "There are so many bands who all get called 'the next Beatles'. Suddenly it puts an awful lot of pressure on them to be the next Beatles.

Oasis were 'the next Beatles' once if you remember. It's a pressure, because suddenly you've got to live up to all the things that we did, and it was a different time. So let's just call them 'the next terrific band'," he said, adding, "They're doing well in America. It's good - good luck, lads."

Watch the trailer for One Direction's This Is Us:

Music journalist and chart expert Paul Gambaccini had previously warned of comparisons to the Fab Four, calling them over-the-top, though nevertheless applauding One Direction's success stateside.

Morgan Spurlock's One Direction documentary This Is Us charts Niall, Zayn, Liam, Harry and Louis' meteoric rise to fame, from their humble hometown beginnings in Doncaster, Bradford, Holmes Chapel, Wolverhampton and Mullingar, to conquering the world and performing at London's famed O2 Arena.

See all our pictures from the One Direction: This Is Us press conference. One Direction At The 'This Is Us' Press Conference Harry Styles At The 'This Is Us' Press Conference Queues For The One Direction Premiere Snake Around Leicester Square One Direction Fans Ahead of Tonight's Premiere