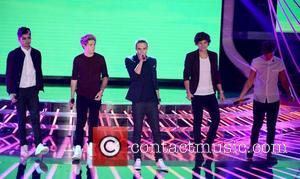 Picture: One Direction perform live on the Italian 'X Factor' Milan, Italy - 01.11.12 ***Not Available for Publication in Italy, Available for the Rest of the...

Perfectly coiffured, stylish stubble and in black and white; One Direction's newly released video for their latest single 'Little Things' is a dead-cert to make its enormous female-fan base swoon.

In the video they can be seen sitting in a studio, singing somewhat solemnly into a mic, and looking longingly into the camera. Ed Sheeran wrote the song when he was just 17, reports Heat, and let the 1D lads have it. Sheeran's influence is more than obvious and the soppy love song is what he does best- which is precisely what Little Things is. A boy telling a girl all the things he loves about her, like her freckles, and her stomach and "the dimples in your back at the bottom of [her] spine" which the singer will "love endlessly". Sickly sweet, but precisely what every 17 year old wants to think what love is.

Sheeran's influence re-appears on their album Take Me Home, with a co-written song called Over Again. One Direction have been enjoying incredible success stateside, and Ed Sheeran looks to be following in their footsteps, or rather Taylor Swift's footsteps, as he is set to support her 6 months, 58 date US tour next year.

Check out the One Direction video right here: