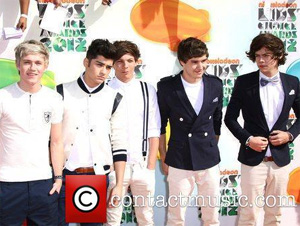 One Direction are back! The biggest group in the world will release their hugely anticipated brand new single 'Live While We're Young' on 30th September.

'Live While We're Young' sees the global superstars once again teaming up with songwriters Savan Kotecha, Rami Yacoub & Carl Falk and the result is unmistakeably One Direction. 'Live While We're Young' is pop perfection - an immediate, energy packed song mixing rock undertones with smooth harmonies, about living for the moment.

The eagerly awaited second album is due for release in November 2012 and sees One Direction collaborating with a whole host of first class writers and producers. As well as reuniting with the likes of Rami Yacoub & Carl Falk and Savan Kotecha ('One Thing' & 'What Makes You Beautiful'), Ed Sheeran and McFly's Tom Fletcher, the album features input from Dr Luke (Katy Perry 'Teenage Dream', Taio Cruz 'Dynamite'), Shellback (Maroon 5 'Moves Like Jagger') and Toby Gad (Beyonce 'If I Were A Boy'). The album is sure to be another huge smash release from a truly international pop phenomenon.

It's been little short of an incredible year for Niall Horan, Zayn Malik, Liam Payne, Harry Styles and Louis Tomlinson. Formed on the 2010 series of The X Factor, they released their Number 1 sensation debut single 'What Makes You Beautiful' in September 2011 and haven't looked back since. 1D Mania has swept the globe, with acres of news print being covered and the band selling a massive 12 MILLION records worldwide.

Their debut album 'Up All Night' has to date reached No.1 in 17 countries - becoming the first UK band to debut at No.1 on the US Billboard chart with their first album. They've sold out tours across the UK, USA, Australia and New Zealand, alongside New York's Madison Square Garden along the way. One Direction's live dvd has also been an amazing success, reaching No.1 in 27 different countries.

In Spring 2013 One Direction will begin their sold out World Tour in the UK which includes a massive nine shows at London's O2 Arena.