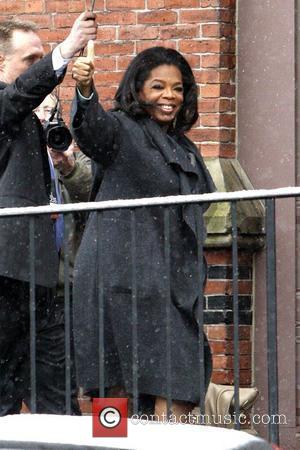 Picture: Oprah Winfrey arriving at Harvard University for the launch of the 'Born This Way Foundation' Cambridge, Massachusetts - 29.02.12

On the heels of the announcement that Rosie O'Donnell's talk show was being canceled after only five months, published reports said on Monday that OWN, the Oprah Winfrey Network, had fired 30 employees, including two high-level executives. The gossip website TMZ described it as a "bloodbath" and said that the fired personnel included the head of the creative services department and the senior vice president of production. It quoted a source at the Chicago-based network as saying, "It's like a ghost town over there." The Wall Street Journal described the firings as part of a restructuring in which executives of Discovery Networks, the parent of OWN, will take over additional responsibilities at the struggling network. The newspaper quoted a statement by Winfrey in which she remarked, "It is difficult to make tough business decisions that affect people's lives, but the economics of a start-up cable network just don't work with the cost structure that was in place." Today's (Tuesday) New York Times commented that the cutbacks represent "the latest public setback" for OWN and come "amid the continuing drumbeat of departures and disappointing ratings" for it.