Away from the charts - of course - as it comes to an end, there's little doubt that 2011 has been a great year for music in a creative sense. The reasons for this are complex, but looking at things simplistically, as a profession bar a handful of globally polished mannequins, the role of musician is no longer one at which it's easy to make a living. Paydays are scarce and sporadic: ten thousand i-Tunes downloads this month? That'll have earned you about enough to splash out on a Sausage & Bean pasty from Greggs. And that's before your label have recouped their recording costs. 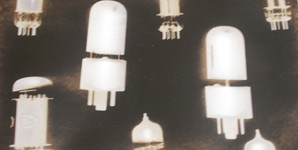 This industry sea change has however on the listener side of the things offered a quite startling, unanticipated benefit. Now far less likely to be parking their Maserati next to Brad Pitt in the VIP area at Cannes any time soon, artists have gone back to being well, artists, as a result making in some cases preconception challenging music without needing to care about whether or not the suits can smell a unit shifter. In this context we've seen some great releases in this year, exploratory works that have ranged on the out there scale from quaint (Metronomy) to bonkers (Bjork) and right through to the pretty weird (James Blake).

You can add Orienteers eponymous first album to that list, it's form probably somewhere closer to Blake in contour than the new wave-disco rumble of The English Riviera. From Ottowa, the group were previously called That's The Spirit, releasing the loved but rapidly lost Staying Places in 2008. What they've been doing since then remains blissfully unclear, but if a listener could hazard a few guesses; staying up 'til dawn in a remote log cabin, reading Gavin Maxwell's Ring of Bright Water over and over and listening to the odd Sparklehorse album would probably be amongst them.

Were this to be another clutch of bucolic odes to love's regret this would in all likelihood have been fairly unremarkable. What gives Orienteers both it's wonder and it's mettle is a playful willingness to experiment: lead singer Ben Wilson describes the band's music as space folk, and it's as meaningful a handle as anything. From the wispy guitar of the instrumental opener Valediction to the final desolate piano chords of closer Entirely, he and his friends weave a deft cabal of influences - as well as the obvious Mark Linkous and Elliott Smith there are also traces of Animal Collective - on a brief but envigorating journey through a panorama of styles skittering from ragged country to dream pop. The gentle lap steel of the early Walking Song for instance speaks of a benign fragility; by it's later return on I Tried To Picture Us there's a true feeling of a greater depth, a confidence returning despite Wilson's still wafer thin vocals, abetted by a totally unexpected thrashing, rock-out climax.

The really interesting bits here though are even more off the beaten track. Rapt in contemplation, A Hymn For The Old Salt comes bathed in sepulchural keyboards and a halo of ritualistic sounding white noise, whilst Man Turns To Sunshine features a lost, waxy trumpet wrapped in amongst a series of ambient piano nothings, slivers presented in the elegantly cascading style favoured by avant garde mavericks like Harold Budd. Neither are totally incongruous here, just different, but by comparison Mastodon - no relation - is a mould breaking trip to Planet Dark Side. Full of the kind of layered effects and looped guitars used to such brilliant effect by Ben Power (AKA Blanck Mass) earlier this year on Sundowning, it's discord is a visceral doppelganger to the sense of sun dappled peace elsewhere, but only underlines the notion that in Orienteers world, like the natural one, there's an oppositional ying and yang maintaining a precarious balancing act. It seems counterintuitive to suggest that copyright blindness as a phenomenon has helped to evolve music in the way that cheap samplers did at the end of the 1980's. But on the evidence of 2011, artist's poverty in a literal sense is leading to some of the most experimentally richest music to be made this century.