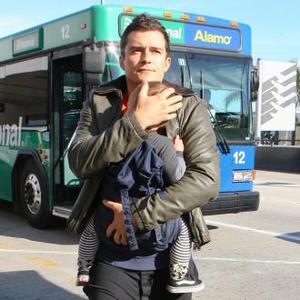 The British actor and his Australian wife - who has 17-month-old son Flynn - are planning an extended trip to 'The Big Apple' after he signed up to play Romeo in a new Broadway version of 'Romeo And Juliet'.

A source told The Sun newspaper: ''Both Orlando and Miranda's jobs take them all over the world, so it'll be nice for him to be in one place for a bit.

''This is a true commitment to spending some quality time together as a family.''

The couple have previously been living in Hollywood, but may have been unsettled after a recent incident where a naked man ''high on DRUGS'' was arrested outside of their mansion.

When police tried to arrest the unidentified man, he dived head-first into bushes in an attempt to avoid officers.

The officers put on black gloves before eventually wrestling the man to the ground, and he was handcuffed with his hands behind his back and driven away.

It is not known who called the police to the Los Angeles neighbourhood, which is also close to the homes of Charlize Theron, Will Ferrell, Jason Statham and Laura Dern.