Orlando Bloom Finds It Alarming Syrian Asylum Seekers Are Travelling "Through One Of The Deadliest Refugee And Migrant Routes In The World". 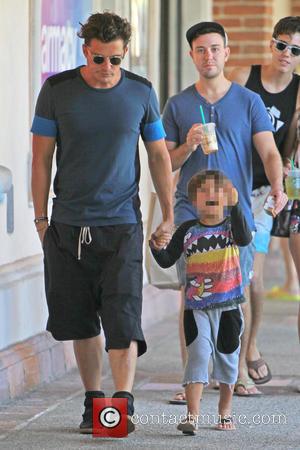 The 38-year-old Pirates of the Caribbean actor recently visited a refugee camp in MACedonia as part of his work as a UNICEF Goodwill Ambassador, spending time playing with the kids and speaking with families about their experience fleeing Syria.

In the process, Orlando was exposed to some of the asylum seekers' harrowing stories.

"These children have travelled through one of the deadliest refugee and migrant routes in the world," he wrote in a UNICEF press release. "I talked to children who endured terrifying journeys, often in extreme weather conditions and for many, walking in the only shoes and clothes they have."

Around 100,000 refugees have registered at the MACedonian reception centre since June (15). The location is right next to the Greek border and many have crossed the line into Greece and been shipped back to MACedonia and vice versa.

Orlando notes the constant shuffling, in addition to fleeing conflict in Syria, has left most refugees feeling extremely dejected.

"They are being shuttled from one authority to another, crossing numerous borders, uncertain of the risks ahead," the star explained. "If they arrive safely at their final destination, they still fear an uncertain future. We need to protect and support them."

Orlando was named a UNICEF Goodwill Ambassador in 2009 and has travelled to many devastated regions since being appointed to the role.

For all of his philanthropic work he is being honoured by the British Academy of Film and Television Arts Los Angeles (BAFTA Los Angeles) with the Britannia Humanitarian Award.

"At BAFTA Los Angeles, we recognise that our industry's power to raise social awareness and push for change is enormous. Orlando Bloom's incredible work with UNICEF and many other charities demonstrates that immense power, and he has consistently gone above and beyond as an active, engaged campaigner for real solutions to urgent global issues," said BAFTA LA chairman Kieran Breen.

Orlando will receive his trophy at the 2015 Jaguar Land Rover British Academy Britannia Awards on 30 October (15), which are being held at the Beverly Hilton Hotel.