By Sam Marland in Music Reviews on 09 September 2010

There's something a touch old skool about Orphan Boy, they sound very 90s at times which differentiates them from many of their contempories. For example, an Oasis styled, feedback intro brings this album to life - the perfect foundation for any rock n roll band intent on blowing the roof off with a certain boyish swagger. While Letters for Annie has just that in abundance, a haze of guitars moaning and wailing their way into your consciousness.

Popsong is a different kettle of fish all together, the Oasis swagger is out the window and in its place is a sensitive and brooding track that's closer to James than the Gallagher's.

However it's unfair to compare Orphan Boy to bands from the 90s, ultimately their sound doesn't borrow too heavily from any of that era and more occasionally nods to it than takes, while morphing with each passing track. A case in point is Anderson Shelter blues, which is as far removed from all that's come before it as it's possible to be, kick starting with a bluesy harmonica, it's a bass heavy rant that charmingly builds up slowly before exploding dramatically. It's almost impossible to work the bands direction throughout let alone pin them down. 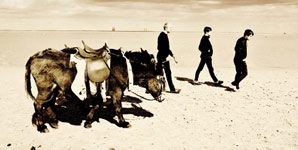