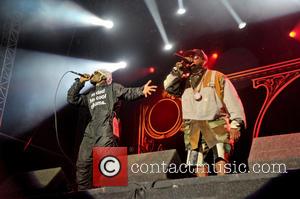 The MISS JACKSON rapper - real name ANTWAN PATTON - credits his teenage musical development to Bush, and he's still so infatuated with the reclusive star he wants to track her down and get her to produce songs for his duo's next album.

He says, "My uncle introduced me to Kate Bush's music when I was about 14 years old, and that s*** opened my mind up. The first one I got was THE KICK INSIDE, then I bought THE HOUNDS OF LOVE, then the THE SENSUAL WORLD.

"She was so bugged out man! But I felt what she was talking about in the songs. MOTHER STANDS FOR COMFORT, RUNNING UP THAT HILL. My uncle would explain what the songs stood for. Like THE MAN WITH THE CHILD IN HIS EYES and all that s***.

"So hopefully on the next record you're going hear OutKast and Kate Bush do at least two or three songs."