By Chris Canavan in Music Reviews on 11 February 2015

Since the age of twelve, Mike Kinsella has loaned his creative efforts to up to seven bands spanning nearly forty albums of work. Together with his brother Tim, the Kinsella brothers are responsible for playing in some of the most prominent American emo acts of the 90s including Joan of Arc, Cap'n'Jazz, Owls and American Football. The development of their sound through these different projects has helped forge distinctive styles that continue to thrive in their respective scenes today. 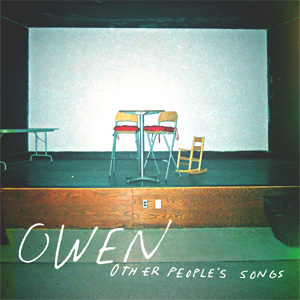 Under Owen, Mike Kinsella continues to make use of experimental techniques that have become synonymous with his projects. His gentle use of intricate melodies and experimentation echo his previous projects but in a much more acoustic setting, representing a transposition of the styles developed over these projects to a quieter, more accessible platform.

On his latest album, 'Other People's Songs', Kinsella borrows from some of his favourite bands like The Promise Ring, Depeche Mode and punk band Against Me! This selection could come as a surprise to some of those familiar with Owen's sleepy aesthetic, but it's their personalities that are fitting to Kinsella's vocal and musical styles.