Pamela Anderson has been named the Imperial Countess of Giglio by Montenegro's Prince Stefan in honour of her work to protect marine life. 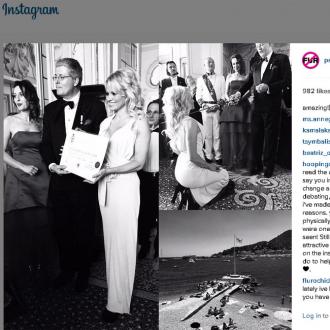 Pamela Anderson has been named the Imperial Countess of Giglio.

The former 'Baywatch' actress - who is well known for her conservation and animal rights campaigning - was given the title by self-appointed royal Prince Stefan of Montenegro at a ceremony in Genoa, Italy, at the weekend.

The 47-year-old beauty knelt on a mosaic floor as she was touched on each shoulder by the prince's sword during the ceremony.

And the actress' two sons, 18-year-old Brandon and 17-year-old Dylan - who she has with ex-husband Tommy Lee - were also given knighthoods for their own conservation work, though they were unable to attend the ceremony because of school exams.

Pamela learned last October that she would be honoured by the prince with the Dame of Grand Cross of the most prestigious knighthood title of Constantine Order of Saint George because of her ''courageous contribution to the protection of marine life and the conservation of wildlife''.

She previously said: ''The prince is a big animal fan and has loved all the work I've done with animals.''

Despite her title - which allows the 'Barb Wire' star to use the prefix 'Lady' - bestowed on her by Stefan, Montenegro hasn't actually had a monarchy since 1988 but the 55-year-old prince claimed the title because of his alleged links to European royalty.