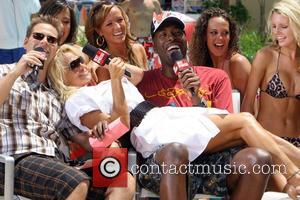 Pamela Anderson and her estranged husband Rick Salomon have begun legal proceedings to annul their marriage.

According to court papers filed in Los Angeles last month, Anderson is seeking an annulment, rather than a divorce.

And Salomon, famed for making a sex tape with heiress Paris Hilton, has also cited "fraud" as his reason for seeking an annulment.

The marriage, Anderson's third after nuptials with Motley Crue drummer Tommy Lee and singer Kid Rock, was sealed in a short ceremony at the Mirage Hotel and Casino on October 6th 2007, with Anderson's two children and Spider-Man star Tobey Maguire among the 60 guests at the short ceremony.

But on December 13th, after only two months of marriage, Anderson filed for divorce, citing "irreconcilable differences", though she later sparked rumours that the union could be saved when a posting on her personal website stated: "We're working things out... "

It was reported in January that Anderson, 40, could be pregnant with Salomon's child.

He was previously married to television actress Shannen Doherty, who gained fame for her role in Beverly Hills 90210.