Pamela Anderson and former 'Price is Right' host Bob Barker teamed up to launch a new stamp range by PETA featuring the 20 most famous vegetarians of all-time at the Hollywood Post Office yesterday (29.11.11). 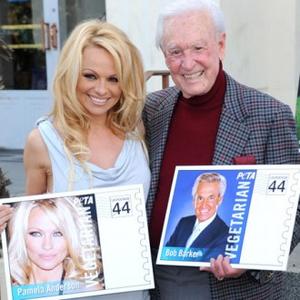 The former 'Baywatch' actress and the TV legend have allowed their likenesses to be used for the stamps, which feature 20 of the most famous vegetarians of all-time, and were on hand at the Hollywood Post Office to unveil the postage payment marks yesterday (29.11.11).

Pamela looked as sexy as ever in a sleeveless ice blue dress, while Bob was dressed in a smart jumper and blazer combination as they unveiled their stamps for the PETA (People for the Ethical Treatment of Animals) campaign.

At one point, the 44-year-old blonde beauty - who has been a spokesperson for the animal rights organisation for several years and has been a committed vegan for over two decades - even leaned in to give Bob, 87, a kiss.

Other vegetarian stars who have agreed to put their faces to the stamps include Sir Paul McCartney, Natalie Portman, Ellen Degeneres, Morrissey, Woody Harrelson and Leona Lewis.

Lisa Lange, vice president of PETA, said: "These are very influential people, and not everyone knows that these folks are vegetarian."

The stamps are on sale in the US now and can be purchased throughout December at www.PETA.org.