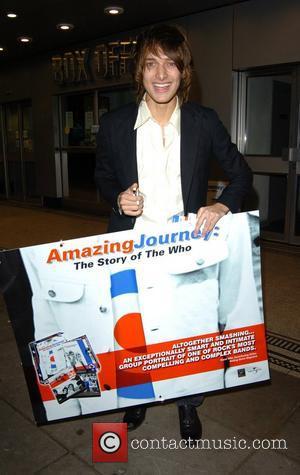 Picture: Paolo Nutini , Premiere of the DVD 'Amazing Journey: The Story Of The Who' at the Odeon Kensington - Departures London, England - 05.11.07

Scottish singer Paolo Nutini was forced to drop an onstage gimmick after mistakenly attracting a gay admirer. The New Shoes hitmaker - who has been dating girlfriend Teri Brogan since childhood - was advised to lock glances with a female fan in the crowd in a bid to calm his nerves. But the 20-year-old star actually exchanged loving looks with a male fan and was forced to admit he was not gay. He says, "When I first started gigging, people were giving me all of these words of advice. They said: 'Find a girl in the audience and sing to her, let her be the focus of the song.' "But once when I did it a guy came up to me later and said, 'I saw you looking at me throughout that song.' "I said: 'I'm sorry man, I think there was a girl right beside you,' "And he went: 'Aww, it wasn't me?' It was the most awkward moment. "He said: 'So you're not gay?' And I said: 'No.' The dude walked away then came up again and shook my hand. "He sort of went, 'I'm sorry about that see you later.' And then he left his number in my hand! Ten out of ten for trying but ever since then I've not run the risk again!"

Paolo Nutini wants to be a carpenter