Review of The Final Riot! Album by Paramore 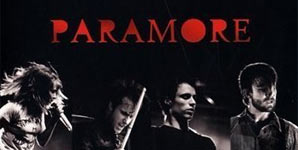 From one of the breakthrough acts of 2008, this is a live CD/DVD package of Paramore's show in Chicago on the final tour to promote their second album 'Riot!' Currently writing new material for its follow up, they've just contributed two numbers to the soundtrack of motion picture 'Twilight'.

Across fifteen tracks the band proves themselves to be an enthusiastic outfit that are a competent live proposition. The songs are mixed well, so that Hayley Williams' vocals are never drowned out and she herself has an impressive energy that constantly comes across even on the audio disc. All of Paramore's best-known - 'That's What You Get', Misery Business', 'Emergency' - are present and they have the confidence to play with arrangements, stripping down the intro of 'crushcrushcrush' to good affect and mellowing power ballad 'My Heart' to an acoustic sway-a-long. Hardcore fans are treated to B-side 'Decoy', which has a brilliant chorus and should have had a full release, while a respectful burst of Leonard Cohen's 'Hallelujah' (X-Factor winner take note) precedes a rendition of their own track of the same name.

The video of the concert is well directed, switching between stage shots and cameras placed directly in the audience, so that the viewer gets a perspective of the energy from both perspectives. The documentary provides a good insight into the tour, mixing post-tour interviews with clips taking along the journey, starting at rehearsals and going right up to the celebrations after the last show. In between you learn of their eating habits, the less glamorous side of being cooped up on a tour bus and witness a party to celebrate their record going platinum, during which the band look truly emotional. Perhaps best of all for their fans is the thank you given by Paramore to their followers, which comes across as genuine and appreciative, and is also displayed by this release being more than a quick money-maker. Sure, it won't win any new fans, but for those who buy it they should be happy with the content.