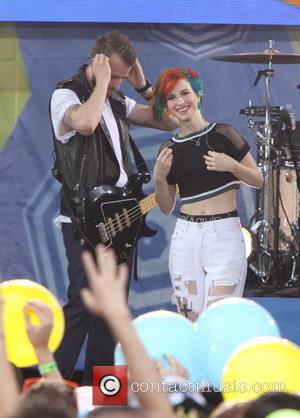 Paramore's performing skills were tested at the Reading Festival in England on Friday night (22Aug14) when their set was wrecked by a power failure.

The speakers blew in the middle of a speech by singer Hayley Williams, and the American act had to improvise while engineers spent 15 minutes resolving the sound problem.

Williams and her bandmates sat down at the front of the stage and she told fans at the front, "The system is down but they're working on it. We're just going to pretend this never happened."

The power was finally restored to a single microphone, prompting the band to play an acoustic version of their ballad Only Exception.

Williams refused to let the sound issues ruin her night, telling fans, "I'm never going to forget this. Alright Reading that was unbelievable."

Full power was restored a few minutes later, allowing the band to wrap up their set with a medley of hits like Misery Business and Proof.

After the show, Williams wrote in post on Twitter.com, "The power outage in the middle of the set tonight was possibly the best thing that could've happened during our 1st headliner @ Reading (sic)... To be able to have a 100 per cent candid & vulnerable moment w/ (with) that many people & at such a high pressure show was so satisfying."

Queens Of The Stone Age headlined the first day of the weekend event, while former My Chemical Romance frontman Gerard Way helped open proceedings with his first-ever solo festival show.