Paramore - All We Know Video 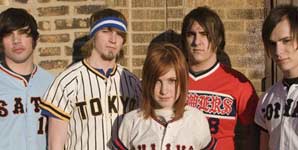 Paramore
All We Know
Video

Paramore will release their single All We Know on December 11th through Fuelled by Ramen records. This will be a download release only. The track is taken from their debut album 'All We Know Is Falling', which was released earlier this summer. The video for All We Know is comprised of live footage from the band's US headlining tour this year and is available now.

Their live show is an explosion of high energy that showcases the band's relentless drive and desire to connect with and entertain the audience, and their enthusiasm is catching. Having made their debut appearance in the UK earlier this year, at the Give It A Name festival, wowing UK audiences all over the country, Paramore returned to these fair shores for a sellout headline tour in October.

Paramore, All We Know, Video Stream