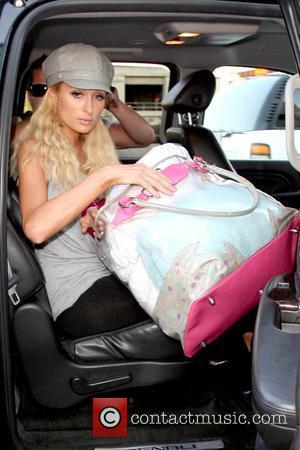 Picture: Paris Hilton arriving at LAX with her boyfriend to catch a flight to Germany Los Angeles, California - 10.09.09

Paris Hilton is at the centre of a legal spat in Germany after reportedly pulling out of a series of events she was scheduled to attend on Friday (11Sep09) and Saturday (12Sep09).
Promoters booked the socialite to appear at a number of industry events in Frankfurt, but mysterious circumstances led to Hilton refusing to leave her hotel room in the city. She then reportedly flew to Italy early on Saturday to judge a beauty pageant, snubbing one party she was supposed to attend with Frederic Prinz von Anhalt's adopted son Marcus.
Sources tell German newspaper Bild that Hilton pulled out of her scheduled appearances due to an argument with her boyfriend, Doug Reinhardt, suggesting the hotel heiress was instructed not to attend the Saturday night event because it was being held in an erotic table dancing club.
Michael Marx, the organiser of one party at top club Mediastar, tells the publication, "Paris Hilton has dishonoured all appointments and contracts - the dinner with 18 high-ranking guests, the appearance at the bar, the autograph session at Mediastar. We are incredibly disappointed."
Mediastar bosses are seeking legal action against Hilton and her handlers.
A spokeswoman for the socialite had not replied to WENN's request for a comment by press time.