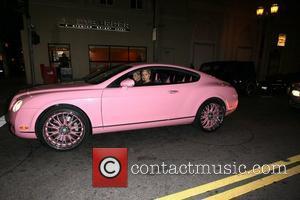 Picture: Paris Hilton driving in her pink Bentley to have dinner with a friend at Beso in Hollywood Los Angeles, California - 18.01.11

Paris Hilton's boyfriend is to be arraigned following his arrest on marijuana possession and DUI charges in Las Vegas last summer (10).
Club boss Cy Waits and Hilton were pulled over by cops on the Las Vegas Strip after they smelled marijuana coming from their car.
Hilton is currently serving a year of probation after pleading guilty to misdemeanour cocaine possession and obstruction of justice, and now a complaint filed on Thursday (20Jan11) charges 35-year-old Waits with a felony of being under the influence of marijuana, and misdemeanour driving under the influence and possession of marijuana.
He faces up to four years in prison on the felony charge if convicted.
Waits will be arraigned on 17 February (11).