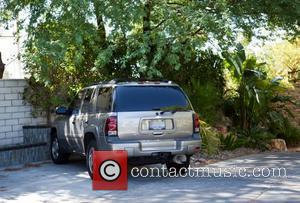 Paris Hilton's boyfriend has been fired from his job at a leading Las Vegas nightclub following the couple's brush with the law in Sin City on Friday night (27Aug10), according to reports.
The socialite and her partner Cy Waits were driving down the famous Las Vegas Strip when their car was pulled over by cops.
Waits was arrested on suspicion of DUI and Hilton was charged with cocaine possession after police officers allegedly found drugs in her purse.
Now new reports suggest Waits has lost his job as head of nightclub operations for Wynn and Encore properties following the scandal.
A Las Vegas insider tells E! Online, "Wynn has a zero-tolerance policy with their club execs when it comes to brushes with the law."
The news comes as new details about the night's events have emerged, with a police officer claiming cops discovered Hilton was carrying a quantity of suspicious white powder when she opened her purse to apply her lip balm and a small bag fell out.
Police sargeant John Sheahan tells the New York Daily News, "Miss Hilton pulled out a tube of lip balm. At the same time... a bindle (sic) of cocaine in a plastic bag came out of her purse."
Hilton's lawyer David Chesnoff remains adamant the socialite will be "exonerated". He says, "As the case proceeds, a lot of facts are going to come to light that will ultimately lead to exoneration."