Paris Hilton has adopted a new Chihuahua dog from The Animal Foundation shelter in Las Vegas. 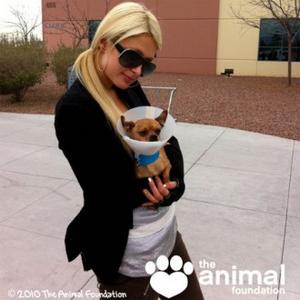 The animal-loving heiress has given a home to a three-year-old Chihuahua and she picked up the cute mutt from The Animal Foundation shelter in Las Vegas on Wednesday (15.12.10).

On her twitter page, Paris retweeted a message posted by the organisation, which read: "RT @animalfndlv: @ParisHilton helps shelter animals. Adopts 3yo chihuahua from Vegas. (sic)"

In another entry The Animal Foundation posted a picture showing the socialite collecting the pooch after he had been neutered - which involves either removing a male animal's testicles or being sterilised so it can't reproduce - and thanked her for taking in a dog.

Paris has also urged her fans to adopt a pet rather than buy a puppy or kitten.

She tweeted: "This Chirstmas if your thinking of getting a dog or cat, get one at your local animal shelter. Save a Life. Don't Shop, Adopt. (sic)"

According to The Animal Foundation's website, it costs $155 to adopt a small dog like a Chihuahua and the fee includes its inoculations, the neutering procedure, microchip identification and a complimentary bag of Science Diet dog food.

The 29-year-old blonde beauty's new canine friend will join her menagerie of other animals which includes several other dogs, a hamster and a miniature pig.