Paris Hilton is reportedly dating male model River Viiperi, who is 10 years younger than her. 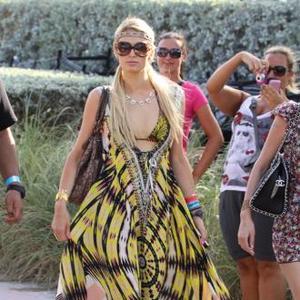 The socialite reportedly met the 21-year-old Spanish hunk when she was attended the Marlon Gobel show at the Lincoln Center during New York Fashion Week with DT Model Management owner David Todd and the pair hit it off.

Since then they have been spotted hanging out backstage at some of the other fashion shows and according to PerezHilton.com are constantly ''snuggling'' and ''seeing each other as much as they can''.

Although Paris, 31, was linked to Dutch DJ Afrojack - the first man since her split from boyfriend Cy Waits - in July, she insisted she was enjoying being single and wanted to be an ''independent woman''.

She said: ''Every woman dreams of getting married and having a family one day, but right now I'm so busy travelling and working I wouldn't have time for that.

''When that time happens, it will be fantastic, but right now I'm just happy being single, and being an independent woman.''

Paris recently reinvented herself as a DJ, and admits she has been undergoing extensive training to get herself to the highest level possible.

She said: ''I've been training every day for six to eight hours for the past year. I was up until 4am most nights.''