Paris Hilton dresses up as her dog for Halloween

Paris Hilton dressed up as her $13,000 puppy for her Sexy Haunted Mansion Halloween party in West Hollywood last night (30.10.14). 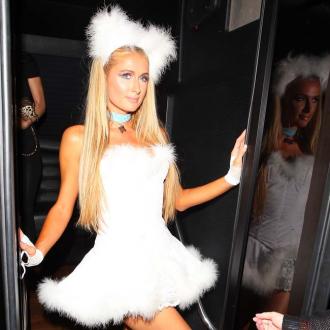 Paris Hilton dressed up as her Pomeranian pooch for her Halloween party last night (30.10.14).

The 33-year-old star sported a fluffy white minidress and matching headgear, which looked like the fur of her $13,000 puppy Prince Hilton, as she attended her own Sexy Haunted Mansion party at 1OAK nightclub in West Hollywood.

The heiress also wore a sky blue collar which bore resemblances to the one her canine wears as well as a pair of white fishnet gloves.

Paris teamed her look with a pair of white high heels and her outfit enabled the beauty to show off her slim pins as well as her striking long blonde locks.

The socialite has fallen in love with her latest animal recruit since she splashed out the huge sum on her four-legged friend.

Paris' latest Halloween attire was not the first time she has sported a white minidress to see in the spooky annual celebration.

Last year, she wore a strapless white dress to go to a Halloween bash as music legend Madonna complete with a Boy Toy necklace.

On Thursday, the star took to Instagram to post a 'Throwback Thursday' picture of her as Madonna last year, adding the caption: ''Last Halloween when I dressed up as @Madonna. #LikeAVirgin #ThrowbackThursday (sic)''

Paris wasn't the only star to make an impression at a Halloween bash last night as Suki Waterhouse flashed some flesh in a glamorous peacock-inspired dress at the Unicef UK Halloween Ball in London.

As well as her costume, the 22-year-old model also let her voice do the talking at the event - which raised money for children in danger in Syria - as she performed a duet with Bryan Adams.

Kate Hudson didn't leave a lot to the imagination as she stripped down to a leather bralet and matching hotpants for her Halloween party in Pacific Palisades, California.

Several stars were in attendance including her mother Goldie Hawn and Katy Perry, who dressed as a giant Cheeto.

Lily Allen dressed as a medic called Dr. Luke - the same name as the music producer who singer Kesha has accused of sexual, physical, verbal and emotional abuse.

The star-studded bashes were no doubt playing some Halloween classics, such as Michael Jackson's 'Thriller', which has been named the most popular scary song of all time by music streaming service Spotify.

Other tunes on the top 10 included 'Monster Mash' by Bobby 'Boris' Pickett, The Rocky Horror Show's 'Time Warp' and 'Somebody's Watching Me' by Rockwell.