Paris Hilton had a great time at the Coachella festival with her sister Nicky at the weekend and admits Jay-Z and Muse were her favourite acts. 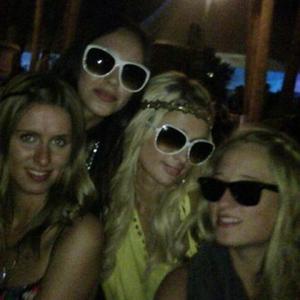 Paris Hilton played on bumper cars at the Coachella festival over the weekend.

The hotel heiress attended the three-day music event in California with her sister Nicky, where they rode the carousel horses, tried their hand at driving bumper cars and "rocked out".

The socialite kept her fans updated on her partying via twitter, writing: "So much fun tonite! Rocked it out to Tomm Yorke and the Gorillaz! So sick!! Loves it! :) The Armani Party was so much fun! It was a Carnival Themed Party. Went on all the rides, Bumper Cars, the Gravitron ride, Carousel + Slides. (sic)"

Paris - who recently split from boyfriend Doug Reinhardt after a 14-month romance - had "so much fun" at the festival and revealed her favourite performances were by Muse and Jay-Z.

She tweeted: "Raged on the stage at MGMT then David Guetta and now am rocking to Muse. Best spot in the house! Huge! Coachella Rocks... Jay Z was amazing! So much fun with my sis and all my girls! :) (sic)"