Paris Hilton is being sued for $35 million for wearing someone else's hair after she reportedly failed to promote a range of hair extensions. 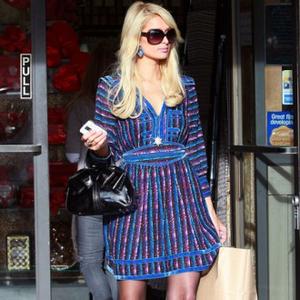 Paris Hilton is being sued for $35 million - for wearing someone else's hair.

The hotel heiress had signed up to promote a range of hair extensions as part of a marketing campaign in 2007 for Hairtech International.

The company reportedly paid her $3.5 million to be the face of their Dream Catchers range of clip-in locks.

But bosses were furious when she allegedly appeared in "magazines and on television" wearing hair extensions made by a rival competitor.

The lawsuit filed in Los Angeles Superior Court states Hairtech International is seeking $35 million in damages for Paris' breach of contract - 10 times what they paid her for the job.

The company also claims the 29-year-old blonde missed a launch party for the hair extension line because she was in jail.

Paris served 23 days in prison in 2007 after she was caught driving twice on a suspended license while on probation for reckless driving.

Hairtech International say there was an "implied term" in her contract asking her to "obey the law".

The reality TV star has been sued before for allegedly failing to promote a product.

The producers of movie 'Pledge This!' told a court in 2008 she owed them $8.3million - the amount it cost to make the box office flop - because she didn't promote it properly.

The judge is still deciding if Paris has to pay them.