Paris Hilton is throwing a bacherlorette party for her younger sister Nicky this weekend in celebration of her becoming MRs Rothschild on July 10. 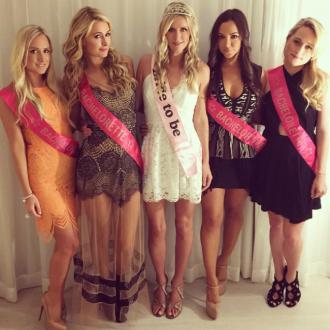 Paris Hilton is throwing a bachelorette party for her sister Nicky this weekend.

The 34-year-old hotel heiress is hosting the bash on Miami Beach for her 31-year-old sibling well before she is due to marry banking heir, James Rothschild on July 10 at Kensington Palace in London, England, as revealed by Us Weekly magazine.

Paris took to Instagram today (06.06.15) and said she was ''so happy'' to be celebrating with her family for the special occasion.

She shared a photo of her sister, including their guests, cousins Brooke Brinson and Whitney Davis, the daughters of the Hilton sister's 'Real Housewives Of Beverly Hills' aunt Kim Richards and Farrah Brittany Aldjufrie, who is the offspring of their aunt Kyle Richards.

The photo shows the celebrations are well underway. Nicky can be seen wearing a tiara crown with ''bride to be'' worded in shiny diamonds and the bridesmaids, including Paris are wearing pink sashes.

The photo was posted with a caption: ''So happy to be celebrating my sister @NickyHilton's bachelorette party with my beautiful family this...(sic)''

Talking about the next stage in her life and her plans for the future, Nicky recently told Avenue magazine: ''People say your life doesn't even begin until you have children. I'm so excited for the next chapter in my life, having children and starting a family. There's nothing better than that.''