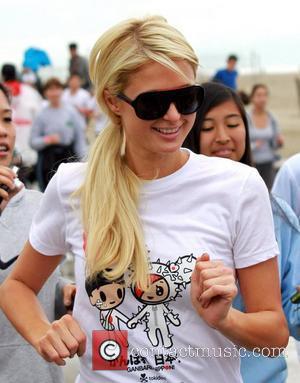 Socialite Paris Hilton was moved to tears as she was handed a prize for her humanitarian work on Saturday night (26Mar11).
The millionaire reality TV star, along with her sister Nicky and mother Kathy, was given the accolade by the Starlight Children's Foundation for her philanthropy efforts.
Following a silent auction and a cocktail dinner at the Century Plaza Hyatt Hotel in Los Angeles, the Hiltons were presented with their Heart of Gold trophies.
Hilton took to Twitter.com after the event to tell her fans about the emotional night, writing, "Such a beautiful evening tonight accepting my award for the humanitarian work I do with the children of the Starlight Foundation. Such a heartwarming night listening to all the parents' speeches. I was so touched that I cried.
"These families and their children go through so much and my heart and prayers are with them. It's such an amazing feeling to give back and make a difference in someone's life. I am so honoured to be apart of such an amazing cause."
And the following day Hilton continued her charity work by taking part in a run alongside singer Fergie, her husband Josh Duhamel and Glee star Dianna Agron, to raise money for the Japanese earthquake and tsunami relief effort.