The troubled star has plenty of support... from celebs 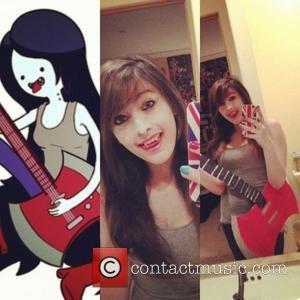 Picture: Paris Jackson posted this image on Twitter with the caption 'my costume (:'

Following Paris Jackson’s attempted suicide, the stars have come out in support for her. None of them had dedicated a song to her, though, until now, but Manson didn’t stop there. He created controversy by mimicking slicing his wrists shortly after dedicating the song to Michael Jackson’s only daughter.

"This song is for Paris Jackson," said Manson to his crown before going into his rendition of 'Disposable Teens' – probably not the best track to dedicate to a teenager who has just attempted to take her life, but Marilyn hasn't always been the best at behaving appropriatly in public. The first verse of the track reads: "And I'm a black rainbow/ And I'm an ape of god/ I've got a face that's made for violence upon/ And I'm a teen distortion/ Survived abortion/ A rebel from the waist down."

A source said that Paris “has suffered terrible bullying recently. All the allegations about Michael abusing children have been back in the news, plus details of his drug use and even questions about whether he is the kids’ biological father.” Jackson wanted to see Manson in concert, but wasn’t allowed to go. "I hope you feel better," Manson said in a statement, "you will be on my guest list anytime you want."

Paris Jackson is a classic teen, apart from the dead superstar dad, etc

Authorities were called out early on Wednesday morning after Jackson had partially slashed her wrists and nearly overdosed on pills. If you or someone you know needs help, please call The National Suicide Prevention Lifeline. Call 1-800-273-TALK (8255. Paris Jackson and Margaret Cho to star in Sex Appeal

Paris Jackson: It's hard being compared to Michael Jackson

Paris Jackson: I self-harmed during my depression battle

Paris Jackson: My dad Michael Jackson used to 'tease' me over girlfriends