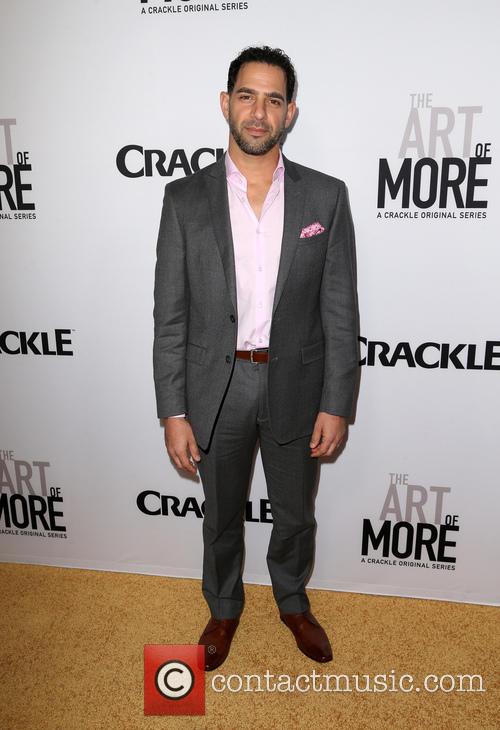 Joe Brody and his wife Sandra are working at a nuclear power plant when disaster strikes. The building collapses, forcing an immediate evacuation of employees due to a radiation leak - but when Sandra doesn't make it out, Joe decides to find out what caused the tragedy. When the government inform the media of a severe natural disaster, he is angered because he knows they are harbouring a dangerous secret. When a series of other calamities, such as a devastating tidal wave, hits New York City, it becomes almost impossible to hide the fact that there's a giant reptilian creature hellbent on destruction heading towards the city; a monster later dubbed Godzilla. The US military set out on a mission to save the world along with a surge of new recruits, but their chances of surviving at the hands of this merciless beast are looking horrifically minimal.

Following a series of disastrous calamities in New York, the government are desperately trying to cover up the cause by insisting that major earthquakes and typhoons are to blame for the demolished city. However, it soon becomes clear to everyone that the damage was caused by a less than natural threat, as a colossal reptilian beast makes itself known to the world; a creature the media has dubbed 'Godzilla'. The US military set out to face the threat in the most dangerous mission of their lives as the origins of Godzilla become known. It is mankind's own destructive nature that has brought this menace to Earth, a fact that is concluded when evidence of Nuclear material is found amongst the wildlife of the Pacific. Can mankind save themselves and rectify their own mistakes? Or are they about to make things a helluva lot worse?

'Godzilla' is the epic re-boot of one of the most iconic sci-fi films ever released. Originally a 1954 Japanese film directed by Ishiro Honda, 'Godzilla' was later adapted into a 1998 motion picture by Roland Emmerich. The 2014 incarnation has been directed by Gareth Edwards ('Monsters', 'End Day') with a screenplay by Max Borenstein ('Seventh Son', 'Swordswallowers and Thin Men') and Dave Callaham ('The Expendables', 'Doom'). The film will hit theaters on May 16th 2014.

While the government go about trying to pass off a series of catastrophic events as natural disasters, the US military are forced to take to Manhattan to rescue New York's ravaged city from a gargantuan menace intent on destroying the world. It is soon discovered that mankind's own irresponsible desire for weaponry and destruction has brought the threat upon them, after evidence of Nuclear chemicals are found around the Pacific. It becomes clear that these radioactive materials have had a genetic impact on the local wildlife, so when an enormous, malformed, reptilian monster dubbed Godzilla takes to the city, armed forces scarcely have a chance at defending their people. Does the human race have the strength and intelligence to survive their biggest threat yet? Or will their past mistakes bring about the apocalypse?

The brand new re-boot of the world's most iconic monster film 'Godzilla' serves as the second Hollywood version since it was first adapted by Roland Emmerich in 1998 from the 1954 Japanese film directed by Ishiro Honda. 'Godzilla' 2014 has been directed by Gareth Edwards ('Monsters', 'End Day') and written by Max Borenstein ('Seventh Son', 'Swordswallowers and Thin Men') and Dave Callaham ('The Expendables', 'Doom'), with an expected release date of May 16th 2014.

US troops are sent in to Manhattan via HALO jumping to save the ravaged city from a monstrous threat that appears to have been caused by mankind's own reckless nature lust for destruction. Nuclear chemicals have caused significant radioactive damage to the genetics of some animals and wildlife, and New York finds itself under attack from an enormous, malformed, reptilian beast that the media subsequently dubs as Godzilla. The creature seems almost unstoppable as it easily wipes out the helplessly floundering human beings around it who never thought their scientific research could backfire so apocalyptically. Can it be stopped by human endeavour? And, more importantly, will it be a lesson learned for modern day human beings?

The world's most iconic and recognisable monster returns in 'Godzilla', the second Hollywood incarnation of the creature after Roland Emmerich's 1998 film and based on the 1954 Japanese film of the same name directed by Ishiro Honda. This time, it has been directed by Primetime Emmy nominated Gareth Edwards ('Monsters', 'End Day') and written by Max Borenstein ('Seventh Son', 'Swordswallowers and Thin Men') and Dave Callaham ('The Expendables', 'Doom'). The 'Godzilla' re-boot is set to come crashing into UK cinemas on May 16th 2014.