Taylor Swift Has Invited Thespians Patrick Stewart And Ian McKellen To Join Her Exclusive Circle Of Friends After They Recited The Lyrics To Her Most Recent Hits During A U.s. Radio Interview. 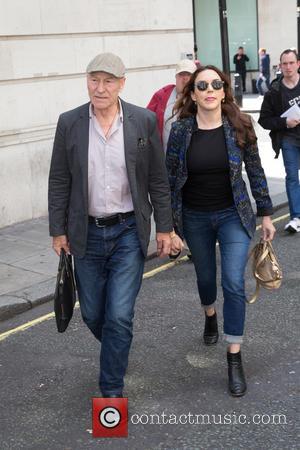 Lord of the Rings star MCKellen proved he was a big fan by reading the lyrics to Bad Blood, like poetry, during a recent appearance on NPR's Ask Me Another show, and not to be outdone, fellow Brit and pal Stewart showed off his knowledge of Swift's Blank Space.

Stewart was so proud of the radio moment, he thought it was worthy of a place in the pop star's inner sanctum of superfans and celebrity pals.

He took to Twitter on Thursday (16Jul16) and wrote, "So @IanMCKellen recited Bad Blood and I did Blank Space on @NPRAskMeAnother. May we join the squad, @taylorswift13?"

The singer was alerted to the correspondence and responded, "Thanks for reciting my lyrics, @IanMCKellen and @SirPatStew! You've made my day. You two are ULTIMATE Squad Goals."

She also posted up several photos of the thespians, including one of Stewart's wedding day in 2013, which was officiated by MCKellen.

Thrilled Stewart couldn't contain his excitement in a follow-up tweet, writing, "OMG I DIE!!! (no really, I might. I'm old.)"

Many members of Swift's "squad" have joined her onstage in recent weeks as she tours North America, so fans can now look out for an appearance from MCKellen and Stewart.

The actor made that suggestion by photoshopping himself and MCKellen into a recent concert photo, featuring Swift and pals like Lily Aldridge and Lena Dunham, adding the caption, "I hope this means I can finally wear leather pants in public."