Paul Bettany Mesmerised By His Wife

Paul Bettany is ''mesmerised'' by wife Jennifer Connelly - but wishes she would move faster. 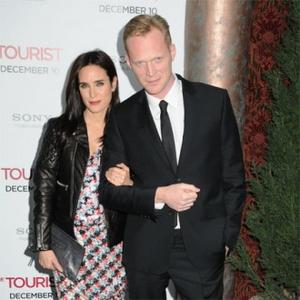 The 'Broken Lines' star - who has been married to the actress for eight years - explained while his spouse is "very beautiful", he finds it frustrating that she always "moves at her own pace".

He said: "My poor wife. She moves at her own pace - she's sort of slightly in slow motion, it's mesmerising and very beautiful - and I'm like, 'C'mon, c'mon', we're going to be late."

Paul explained his home life has changed since becoming a father to Stellan, eight, and seven-month-old Agnes, as well as raising Kai, Jennifer's 14-year-old son from a previous relationship, as he turns down movie projects because his kids need to know he'll be around.

He added in an interview with Observer Food Monthly magazine: "I don't want to sound like it's been a sacrifice for me. Sometimes you make decisions to not work and be with your family.

"I have children - they need to know Dad's going to come home."

However, Paul admitted while as an actor he can make mistakes, the same cannot be said for being a parent.

He explained: "You can fudge a lot as an actor but you can't fudge being a parent."