M.I.A's has announced her fourth album will be released in December and will sound like ''Paul Simon on acid.'' 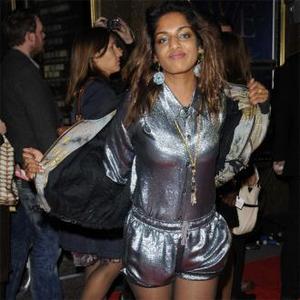 The 'Bad Girls' hitmaker will release her fourth, as-yet-untitled album in December, which she joked will sound like a psychedelic version of the 'You Can Call me Al' singer and will be accompanied by ''a book, documentary and art exhibition.''

She also answered fans questions about the recording, saying she does not know how many tracks will be on the final version.

She tweeted: ''Its still in the making -could be 5 it could be 15 depends on what sounds good in my bros CAR (sic).''

She also revealed one of her favourite lines from the album as ''truth is like a rotten tooth u gottu spit it out!!!(sic).''

M.I.A., real name Maya Arulpragasam, also said she will not include any collaborations on the record, and when asked which producers she was working with, replied: ''ones that dont act like fame whore coloniser (sic).''

The singer - who's last album, 'Maya' was released in 2010 - caused controversy earlier this year when she appeared alongside Madonna at the Super Bowl XLVI Half Time Show in the US, and was shown flipping her middle finger at the camera during the track 'Gimme all your Luvin'.

Madonna later said she ''wasn't happy about it,'' adding: ''It's one of those things, it's such a teenager...in a way, kind of irrelevant kind of thing to do. There was such a feeling of love and unity there, what was the point? It was just out of place.''