Paul Weller's new EP Dragonfly is essentially a victory lap. Following his trilogy of experimental albums that concluded with Sonik Kicks earlier this year, the Modfather has bundled a number of unreleased songs from the sessions for that record into a limited run release that's arrived just in time for Christmas. Available to download or on a pressing of just 3,000 vinyl copies Dragonfly is an interesting companion to its parent album, although it's by no means essential for the casual fan. 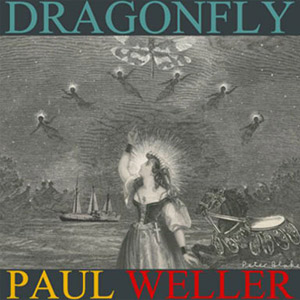 While the title track is reflective of much of the Sonik Kicks material with its up-tempo swirling guitars and urgent drumbeat, the remaining 5 songs here are far more sedate. They bring to mind Weller's earlier solo material, and reveal just how far he's moved forward from acoustic compositions that provide the perfect soundtrack to a hazy summer afternoon. As these are songs that didn't make the record itself, they also show just how selective Weller has been when compiling his recent albums.

Don't be fooled though, these aren't half finished cast offs or aborted ideas. Instead, they just don't fit comfortably elsewhere. While there's less emphasis on sonic experimentation, Weller has plenty of things to say in his lyrics. 'Lay Down Your Weary Burden' sounds as if it's a love letter to his more anger fuelled punk roots: "You may think your hate has us trembling in our shoes, but no-one really cares, it's only you hurting you." That reflective mood continues on 'Portal To The Past' when he says: "As I dive through the portal of my youth, for as quick as it comes, is as quick as it goes." In many ways these songs serve to bookend Weller's recent albums. They seem to be signposting that he's now ready to look forward rather than back, having reconciled the nostalgia demonstrated on recent tracks like 'Fast Car/Slow Traffic'.

That outlook seems to be cemented in perhaps the most upbeat song on the EP, 'The Piper'. The almost anthemic finale to this collection includes a funky bassline, pianos and backing singers along with the rather telling line: "Say sing, my brothers and sisters sing, tomorrow is yet unborn". While there aren't many clues here as to what Weller's next musical re-invention will be, it seems pretty clear that he's looking for a new challenge as he juggles music with his role as a new father. That unpredictability is one of the many reasons why Weller remains such an interesting artist.

The Dragonfly EP is therefore well worth your time if you have any interest in Weller's more recent output. However, for the more casual listener, it may seem like it's business as usual for the Modfather. The 5 additional songs certainly deserve to be heard, and it's a welcome move that they haven't just ended up on the cutting room floor.