At the age of 53 you'd be forgiven for thinking that Paul Weller may have left his angry young man persona far behind him. But unlike the hazy and melodic songwriting he demonstrated during the 90's, the Modfather has been pushing himself in any number of directions on recent records. His 11th solo outing Sonik Kicks is a loud, noisy and eclectic affair that perfectly bookends a trilogy of experimental albums that started with 2008's 22 Dreams. 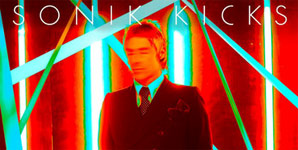 Living up to its name at all times, Sonik Kicks is predominately preoccupied with noise rather than words to create its narrative. It thunders out of the starting blocks with 'Green', which fizzes into life with keyboards and guitars jumping from one speaker to the next while Weller mutters his stream of consciousness lyrics that appear to be somewhat life affirming. The only thing grounding this rollercoaster is the frenetic drumbeat, which keeps everything in check. Otherwise it sounds like someone's left Paul with the keys to the studio and told him to do whatever he wants, and that's really the key to understanding this record.

There's a line later on in 'Dragonfly' that also seems to sum up Sonik Kicks' virtues. "She's like a horse with no rider", Weller sings, but as he does so you start to understand that his creation is more a force of nature, unpredictable and beautiful. It morphs from one musical style to the next, defying expectation, with little regard for conventional wisdom. One such example is the domestic stomp of 'Kling/Klang' ("Seen anybody at the Saracen's Head?") that suddenly melts into the interlude instrumental strings of 'Sleep Of The Serene', which then transforms into the more traditional balladry of 'By The Waters'. That Weller is able to cover such a diverse scope of material in a mere 9 minutes is a testament to his clever and free flowing songwriting.

Weller has also roped in a few of his friends here too. Graham Coxon wanders in periodically with his guitar during Sonik Kicks brisk 40 minutes; Noel Gallagher also sneaks in an appearance. But the collaboration that stands out is 'Study In Blue', a duet with his new wife Hannah. It avoids the trap of falling into Lennon/Ono slush, and for its first three minutes ambles along talking about cats, gardens, birds and bees. Then suddenly the track deconstructs itself to form a full on instrumental dub groove for the remainder of its six-minute runtime.

The more cynical listener may think that Weller's schizophrenic sensibilities demonstrated here, as he jumps from style to style, could signal that he's struggling to pin down any one particular idea. That's not really a fair assessment though; his recent output may not at times have been a comfortable listen on first inspection, but it's striving to push his boundaries. In that way Sonik Kicks is a little like a Jackson Pollock painting; confusing, complicated, but full of ideas. You may not want it hanging on your wall, but in this case you recognise there's something impressive in the way Weller has stitched together so many different instruments and styles.