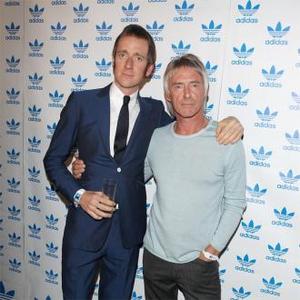 The cyclist - who scooped a gold medal in the time trial at the London 2012 games last week - was among a host of Team GB athletes at the adidas Underground gig and he was thrilled to meet one of his musical heroes.

Bradley - who is also this year's Tour De France winner - was just as excited to see The Stone Roses play live at the east London venue because the group had a massive influence on him.

He said: ''The first song that ever really stopped me in my tracks was when I was 11, in my first year at secondary school in 1991.

''I came back home from school and saw The Stone Roses doing 'Don't Stop' on the television. That stuck in my memory and I started getting into The Stone Roses just as they were coming into their best period.''

The 32-year-old sportsman was joined at the concert by several other members of Team GB, including fellow gold medallist Jessica Ennis and bronze swimming medallist Rebecca Adlington.

A host of stars also turned out for the intimate show such as Daisy Lowe, Boy George, Jaime Winstone, Miles Kane and Jimmy Page.

After taking to the stage just before midnight, The Stone Roses - singer Ian Brown, guitarist John Squire, drummer 'Reni' and bassist 'Mani' - played an incredible greatest hits set which featured classic tracks like 'Waterfall', 'Love Spreads', 'This Is The One', 'Fools Gold' and 'I Am the Resurrection'.

The show was hosted by adidas to celebrate the Olympics and was free for a few hundred lucky London-based fans who had purchased tickets to the band's Heaton Park comeback shows in Manchester.