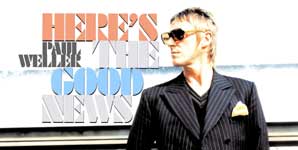 Paul Weller releases his new single "Here's The Good News" on December 5th. Taken from his unanimously acclaimed recent top 5 album "As Is Now", the single is released on the following formats and includes a remix from Death In Vegas' Richard Fearless :

Paul recently finished a successful tour of the US. Currently in Europe he returns to the the UK to play a big ol' 18 date tour – remaining dates are:

Supports come from Dogs plus The Ordinary Boys (London only).

What they said about "As Is Now"….

"The sound of a man with the wind back in his sails" – Q 4*
"Weller's back. And this time he rules" – NME
"As Is Now may be his finest and most consistant record since 1993's Wild Wood; possibly even since the days of The Jam" – MOJO" 4*
"As Is Now is quite simply his best album for years" – The Sun 5/5
"A triumphant album that keeps faith with the best elements of Weller's past, while looking to the future. The modern world never sounded so good" – DAILY MIRROR 4*
"A work of rejuvenating power…An icon reawakened" – UNCUT 4*
"With a gravitational pull that sucks you in and refuses to let you leave until it too has run its course, As Is Now is his best set in a decade" – THE TIMES 4*