That mixture of excitement and nostalgia you feel when you play your Slanted and Enchanted 12"? Paws, Dolfinz, Waiters and Sex Hands feel that too. That faded, home-made Guided By Voices t-shirt you can't quite bring yourself to throw away? They understand your attachment. That red-faced, finger-jabbing argument you had about whether Cat Power's version of 'Bathysphere' was better than Bill Callaghan's? They've all been there. That slow-seeping sadness you felt when you realised that, in all likelihood, nobody else on the planet had listened to Urusei Yatsura's 'Hello Tiger' single in at least a year? Actually, you're probably alone there. 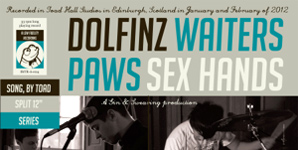 The four bands that collected on this split 12", organised and released by Edinburgh label Song, By Toad, all make music which evokes an earlier time. They're Generation X-ers trapped in Generation Z (or whichever letter we've reached now), striving to recapture the sounds of the underground indie bands of times past. Waiters compose dream-like ditties with their roots very obviously in shoegaze. Paws contribute fuzzed-up grunge-pop. Sex Hands specialise in nonchalant, Pavement-influenced indie-pop songs, most of which, to cement the 1990s connection, appear to have lyrics which reference Friends. Dolfinz are to some extent the outliers, in as much as their music has a sloppy, home-brewed garage rock vibe which recalls pre-punk bands as well as recent groups like Wavves. On the other hand, their 'Teenager In Bloom' has both a grungy guitar sound and a lyric about teenage lust redolent of similarly cute-but-dirty efforts by Calvin Johnson.

If you loved this strain of indie-rock first time around, or if you're a fan of contemporary revivalists like Yuck, you'll find plenty to enjoy here; if you tend to view everything that predates LCD Soundsystem with disdain, you're out of luck. And if you're agnostic towards the sounds mined on this compilation? Well, it's certainly worth a listen; the standard of song-writing is high throughout. The best-known of the bands, Paws, are solid contributors, with the scuzzy, energetic 'Kill A Familiar' a real highlight, and their Big Deal cover 'Chair' barrelling along enthusiastically. Sex Hands know how to write a catchy pop song, and 'Gay Marriage' in particular features some great lead guitar work. The contributions by Waiters and Dolfinz are slightly less impressive; the latter's 'Kitsch Craft' sounds, for better or worse, like an unexceptional Wavves album track, and while the former's songs drift along atmospherically, only the slow-burning 'So-So' stays with you. Waiters are perhaps the only band not to benefit from the album's casual, live-sounding mix, which complements the raw energy of the other groups. Nevertheless, on the whole this is an enjoyable record which showcases some promising bands.