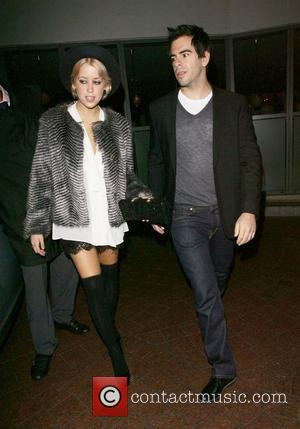 Peaches Geldof is recovering after an operation to remove a painful cyst earlier this week (begs13Sep10).
The daughter of rocker Bob Geldof underwent surgery after experiencing constant discomfort, and she's delighted the procedure was a success.
In a series of posts on her Twitter.com page, she writes, "To everyone asking - I'm in hospital because I had a painful cyst that needed removing. The cyst was removed successfully and I'm doing fine. Thanks for the kind words tweetpeeps!"
Geldof was released shortly after the operation and she's now recuperating at home in Los Angeles with her boyfriend, moviemaker Eli Roth.
She adds, "Never been happier to be back home in LA. Feel like I haven't been home in years. Between going cross (sic) America with my boy for his movie tour, heading 2 London 2 film, then Paris & nyc (New York City) then getting seriously ill and having to have an op, it's been an intense time! Just want to lie in bed forever now!!"