Peaches Geldof has blasted model Katie Price for criticisng her after she posted photos of her pet dog playing with her baby son. 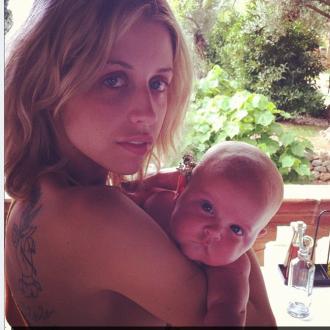 Peaches Geldof has blasted Katie Price for ''lecturing'' her on mothering skills.

The socialite was criticised for letting her dog Parper play near her six-month-old son Astala by the 34-year-old TV star, who urged her to ''remember dogs can easily get jealous of new babies''.

Peaches doesn't appreciate Katie's comment - made in her newspaper column - and has taken to her twitter page to suggest the former glamour model worry more about her own lifestyle choices, particularly the amount of men she dates.

Peaches - who last week revealed she is pregnant with her second child with husband Tom Cohen - tweeted: ''Funny that Katie Price aka 'Jordan' (lol) thinks that I shouldn't allow my gentle, sweet golden retriever dog near his best friend, my son (sic).

''I could say the same thing to her about letting some of the multitude of 'boyfriends' she has near her kids. They all seem to be more vicious and far less intelligent than my dog will ever be. And I do just LOVE seeing her flash in the press all the time. *vom* (sic).

''A female role model for the times if ever I saw one, and of course the perfect person to be lecturing me about my mothering skills (sic).''

Katie - who has three children, Harvey, 10, from her romance with soccer player Dwight Yorke, and Junior, seven, and Princess Tiaamii, five, from her marriage to Peter Andre - recently split from her Argentinean boyfriend Leandro Penna, and was also briefly married to Alex Reid.

Writing about Peaches in her Sun on Sunday column, Katie said: ''Let's hope [Peaches] grows up a bit more before becoming a mum to two tots.

''An animal is an animal and that means they can turn on you at any point. All new mums should also remember that dogs can easily get jealous of new babies.

''I've got two French mastiffs and a French bulldog at home but my kids are only ever allowed to play with them over the fence.''