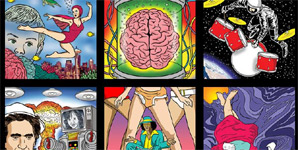 Interactive CDs are very, very annoying. I don't know why, but ever since Origin Of Symmetry made me put a code in to watch an arbitrary video I've been moderately annoyed. That's a bit of a back step from very, very annoying, which leads me rather unsuccessfully into Pearl Jam's long awaited release, Backspacer.

The interactive part of the CD has just broken my computer (and then opened Front Row for no reason), so, unfortunately, it'll just be the music bit that I'll be talking about. And it's good enough, anyway. I don't think time has been very kind to Pearl Jam's sound, unless you're referring to the American alt rock radio stations this sort of music bred- but to paraphrase Thom Yorke, it's a little bit like the noise a fridge makes in the background. That said, when the band slow it down, it's quite pretty: a track like Just Breathe isn't overdone (like similar track The End) and fits just right- and so is my sole recommendation on the record.

Pearl Jam is a little bit like Goji Berries. If you're not already a fan, a taste is going to leave you very confused- the berries taste quite a lot like soap, incidentally -and while this album is better than eating soap, that's not a particularly high accolade. I've never given an album a number out of ten before, but this is definitely a solid 6. There's interesting parts, but it's not good enough for the second-glance that a 7 would infer. If you're a fan, you already have this record, and if you aren't, you probably need to check out some of their earlier work first.