Perrie Edwards' mother Debs insists her daughter didn't force Zayn Malik to leave One Direction and is adamant the decision to quit was all his idea. 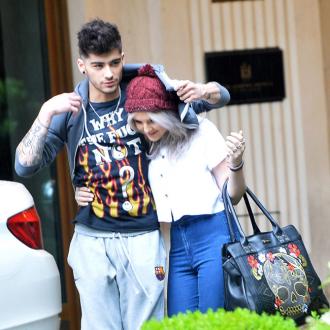 The Little Mix star was on the receiving end of Directioners' online anger in March after her fiancé decided to quit the chart-topping band, with fans saying she forced the 22-year-old hunk to quit for the sake of their relationship.

Her mum Debs is adamant the blonde beauty didn't influence his choice.

She said: ''It was his decision and nothing to do with Perrie.''

Fans recently branded Perrie Yoko Ono - John Lennon's wife who was blamed for breaking up The Beatles by angry Fab Four fans in 1970 - after Liam claimed Zayn walked away to spend more time with his ''missus''.

He said: ''He wanted to spend time with his family and his missus. That's cool with us.''

However, the couple - who started dating in December 2011 when Perrie was still on 'The X Factor' - have ''always been happy'', with the 21-year-old star's mum admitting she feels like Zayn is like a son to her because they are so close.

Debs explained: ''They've always been happy. Zayn's one of the nicest boys I've ever met and I couldn't imagine Perrie with anyone else. I feel like he's already my son, they've been together since she was on 'The X Factor' so he's part of the family.''

The dedicated parent added she frequently sees the couple, especially to make them delicious meals when they're feeling down.

She told the Daily Mirror newspaper: ''They've got plenty of time (to get married). They're still young. I visit quite a lot to cook them Sunday roasts. She could be like, 'Mam, I'm upset, take the day off and spend it with me,' and I would.''