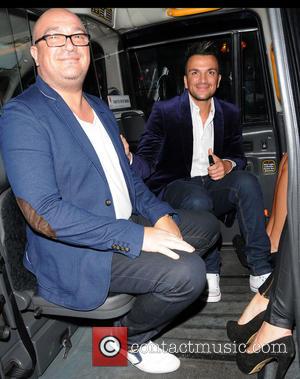 Picture: File Photo Australian singer PETER ANDRE has been left devastated after his brother Andrew died following a battle with kidney cancer. The...

Peter Andre has been left heartbroken after his brother Andrew, 54, lost his battle with kidney cancer. Andrew Andre passed away in the early hours of Sunday (December 16, 2012) with Peter and the rest of his family at his bedside.

A spokeswoman told The Mirror, "Peter is devastated. He was very, very close to his brother.This is the very first family member Peter has experienced losing. He just needs time to grieve." Andrew was diagnosed with kidney cancer in February and was reportedly responding well to treatment before his situation worsened last month. His parents flew from their home in Australia to the UK last week. A family friend said, "Everyone was with him when he passed away.They all did everything they could for Andrew and there wasn't one waking minute when he wasn't with somebody." Andrew's brother Chris confirmed the sad news on his Facebook page, writing, "Love you my brother. Never to be forgotten, i'll see you when i get up there someday. Until then rest in peace and enjoy the tranquillity."

Peter - who has enjoyed a resurgence in popularity in recent years - was preparing for a show in Cardiff earlier this month when told Andrew had taken a turn for the worse. He immediately cancelled the remaining tour dates to be with his brother at Royal Marsden Hospital in Chelsea, West London.