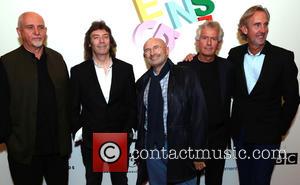 Peter Gabriel performed David Bowie's Heroes in Germany on Sunday (09Nov14) to mark the 25th anniversary of the collapse of the Berlin Wall.

The former Genesis star was backed by a full orchestra during his appearance at the Brandenburg Gate.

Gabriel recorded his version of the Bowie anthem - about a couple meeting at the Wall - for his Scratch My Back album.

The Berlin State Orchestra also performed Beethoven's Ninth Symphony at the special concert, which ended with the release of 8,000 lighted helium balloons across the city.